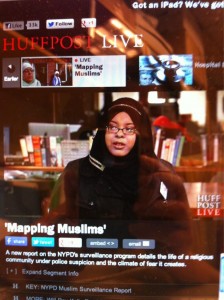 On Monday, March 11th, the Muslim American Civil Liberties Coalition, the Asian American Legal Defense and Education Fund and the Creating Law Enforcement Accountability & Responsibility (CLEAR) project released the report, “Mapping Muslims: NYPD Spying and its Impact on American Muslims.” The report highlights the impact surveillance has had on Muslim New Yorker’s religious life, college studies, and freedom of speech. In addition, the report describes how the surveillance of Muslim Communities has eroded trust between American Muslims and the police assigned to protect them.

MCN’s Program Associate, Maryam Said, spoke at the report’s press conference, discussing the effect NYPD’s surveillance has had on her college experience. Maryam shared, “I joined the Muslim Student Association, only to find silence. Not the silence of individuals who had nothing to say, but the silence of those whose speech has been repressed from fear of who may be out there listening, misinterpreting, and labeling them as potential suspects to a crime they did not commit.” Following her comments, Maryam and other Muslim Community members attempted to enter the NYPD’s headquarters to deliver the report to Commissioner Ray Kelly, but were denied entry to the building. On Wednesday, March 13th, Maryam joined HuffPost Live to continue to share her experiences and the findings of the Mapping Muslims report. Maryam commented that the criminalization of faith must end.