MCN Screens, “A Test of Freedom…” 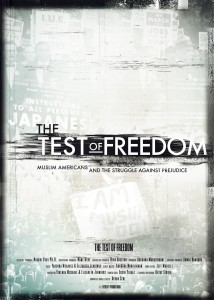 On Tuesday, March 19, 2013 the Muslim Consultative Network and Intersections International co-sponsored a screening of the Everest Production’s film, The Test of Freedom: Muslim Americans and the Struggle Against Prejudice. By the grace of God, we were joined by over fifty of our faith partners and community members!

The Test of Freedom follows the lives of nine Muslim Americans who live out their faith and confront discrimination in ways that uplift those around them. Rejecting portrayals as the villain or the victim, they set forward their own narratives about the role of Islam in an increasingly diverse and divided America.

After the screening, MCN’s Executive Director, Ashleigh Zimmerman, moderated the post-screening Q&A panel discussion with Director Khaliff Watkins, Producer, A. A Yasiin, and Director of Center for Interfaith Affairs at the Peace Islands Institute, Ibrahim Sayar. The discussion following the film explored additional ways in which the audience could support American Muslims as they face increasing discrimination in the U.S., and the impact the filmmakers hoped to make in producing the film.