Muslims in the Mirror at Baruch College 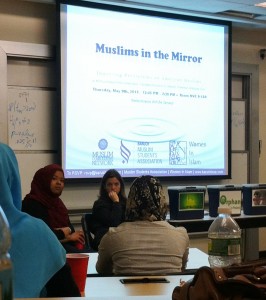 On Thursday, May 9, 2013, MCN hosted a Muslims in the Mirror workshop with the students of the Baruch College Muslim Student Association and Women in Islam. Continuing with the year’s topic, “Improving Perceptions of American Muslims,” this discussion focused on the ways in which the marginalization of American Muslims has occurred.

Through the conversation, the group identified actions used to create fear of the Muslim community. They then collectively came up with skills and resources that they believe the Muslim community needs to acquire in order to properly counter these misrepresentations. A few of the skills mentioned include media training, networking and raising funds to support Muslim organizations. They also cited a need for an increase in the willingness of the Muslim community to utilize the media to share their perspectives on current issues and tell their personal stories.

God-willing, we hope to incorporate skill-building sessions such as those identified into future Muslims in the Mirror workshops. Our hope is that by doing so, MCN can help instill the confidence needed for Muslim college students to stand up and address the very situations that are currently dis-empowering the Muslim Community of New York. For more information about Muslims in the Mirror, or to find out how to get your Muslim Student organization involved, contact Maryam Said at maryam.said@mcnny.org.