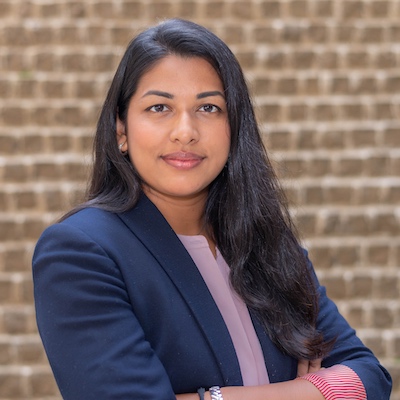 Aniqa Nawabi joined MCN as its new Executive Director on October 2018. She brings nearly a decade of experience in non-profit management and policy to this role.

Prior to joining MCN, Aniqa served as the Director of Development at Chhaya Community Development Corporation, a non-profit organization that works on the housing and immigrant rights of the South Asian community in New York City. As the lead fundraiser, she raised a budget of $1 million+ each year and helped expand and grow Chhaya's reach among the individual donor and institutional funder landscape in New York City. She first started her career as an Assistant Research Scholar at New York University where she studied post-conflict states and worked on international development projects in Afghanistan.

As an immigrant from Bangladesh and growing up as a Muslim American teenager in Queens, New York, she saw firsthand the struggles Muslim communities face in the post-9/11 era. Aniqa grew up in Germany and South Africa before coming to the United States and holds a Masters in Public Administration degree from New York University's Wagner School of Public Service and a B.A. from the City University of New York-Queens College. She is a mother of two, an avid traveler, and speaks Bengali, Hindi, and Farsi. 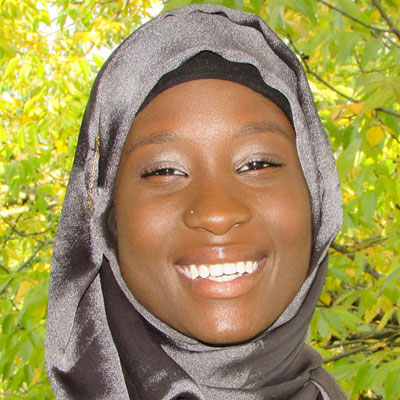 Kujegi Camara is a Bronx, NY native with roots from the Gambia.

She is a recent graduate of the Immigrant Justice Corps Community Fellowship, where as a Department of Justice Accredited Representative, she provided direct legal services and representation to low-income African immigrant women and their families. Kujegi comes to MCN with a background in research, migration studies, youth programming, interfaith organizing and community engagement. Kujegi is passionate about creating meaningful connections across different platforms, entities, and people. As program manager, Kujegi is excited to grow the organization’s interfaith program, youth program, and to broaden the reach of its community education programs within NYC’s diverse Muslim communities. In her personal time, she performs and writes spoken word poetry and is co-founder and President of the Smiling Coast Women Empowerment Network, a grassroots initiative that mentors young West-African Muslim females and helps them on their journey towards college.  She holds a bachelor’s degree in Anthropology from Princeton University. 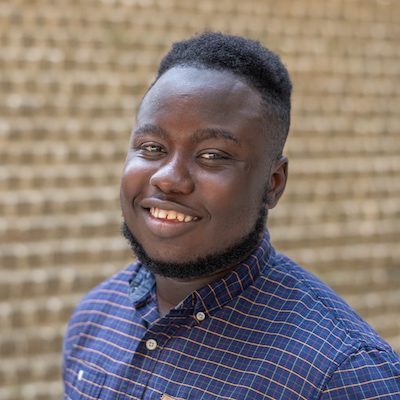 Ali Kaba is our newest Civic Education and Advocacy Program Coordinator. He
joined MCN in February 2020 as our Census Captain where he helped complete 2,000 Census applications and
now has assumed the full-time role of Program Coordinator. Ali has grassroots experience in election organizing. He
was a mayoral campaign canvasser, a city council campaign field canvasser,
and state senate race field organizer. He is a member of the Bronx County BOE
committee member. He hails from the Ivory Coast and has a B.A. in political science from the University of Buffalo. 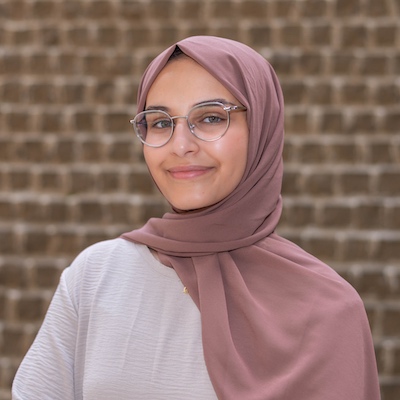 Originally from Ohio, Rana earned her undergraduate degree in international relations with a minor in history and Arabic from Ohio State University. She recently graduated from a Master’s of education in higher education program from Temple University. She has a background in post-secondary education policy, non-profit management, and education research. Rana likes to spend her free time volunteering at different NYC based non-profits with a focus on education in disadvantaged communities.
“I look forward to creating new ties to the community, growing MCN’s reach, and serving the Muslim Youth of New York City. In my free time, I enjoy all outdoor activities and reading.” 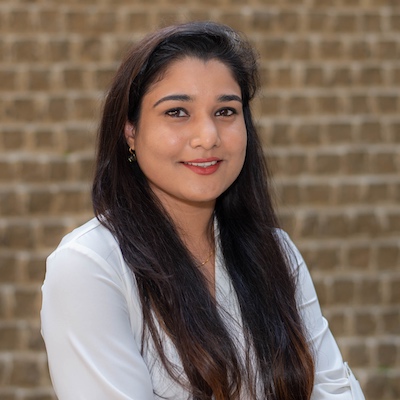 Sweta joined MCN in March 2019 and has been instrumental in delivering critical administrative and program support to the team.

Before joining MCN, Sweta has been volunteering at Chhaya Community Development Corporation where she assisted the housing team with phone banking and outreach. She also assisted in data and file management, provided translations, and her expertise in event management for the annual Chatpati Mela event.

Sweta grew her management and counselling skills while working at National Institute of Fine Arts where she managed HR functions for 4 Institutes with over 200 students. She also planned, directed, and coordinated all the activities in the arts department and also promoted events and exhibitions. Sweta also managed balance accounts and records and prepared academic and financial data for NIFA.

Having her educational background in Fine Arts, Sweta has strong graphic skills. She also works as a freelancer designing posters, magazine ads and catalogues.

When not working, Sweta loves to paint and enjoys reading. 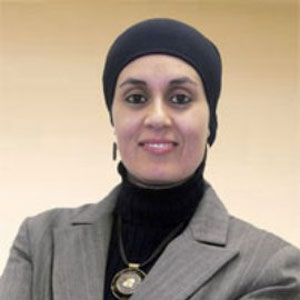 President - Board of Directors

Dr. Debbie Almontaser is the founding and former principal of the Khalil Gibran International Academy.

Dr. Debbie Almontaser is the founding and former principal of the Khalil Gibran International Academy. A 25-year veteran of the NYC Public School System, where she has taught, trained teachers, and served as a multicultural specialist and diversity adviser.

Dr. Almontaser is a published writer on Education and American Muslim issues.  She has been profiled in the NY Times on the founding of the Khalil Gibran International Academy as well as Time Magazine, Newsweek, and profiled in the Daily News for spearheading the inauguration of NYC’s Arab Heritage Week in 2005.

Recently, Dr. Almontaser was a featured speaker at the 2016 National Democratic Convention. Dr. Almontaser is a recipient of numerous awards ADC National’s, Rose Nader Award Commitment to Values of Equality and Justice, Pax Christi’s Local Peacemaker Award, Jews for Racial and Economic Justice’s Risk-Takers Award, the Annual Faith Leaders Award and proclamations for building bridges of understanding from the Mayor of the City of New York, Brooklyn Borough President and a proclamation from the New York City Council for her excellence in education and a proclamation from the NYC Comptroller’s office for her civic engagement organizing work. Dr. Almontaser was a Columbia University Revson Scholar in 2005. She was also named a Thought Leader at the ASMA Society Muslim Leaders of Tomorrow Program in 2006. 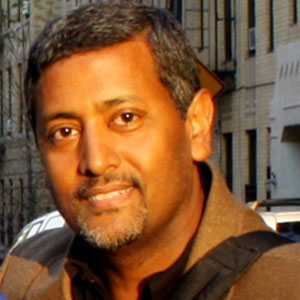 M. Bari Khan has been active in Islamic affairs and the Muslim communities in New York for many years.

Bari is one of the original founders of the Islamic Center at NYU, one of the leading university based Islamic organizations in the United States, and is active in several South Asian and Islamic community groups today.  Upon his graduation from NYU’s Wagner Graduate School of Public Service, Bari joined City Hall under Mayor David Dinkins, one of the first Mayors to endorse diversity initiatives in the City and recognize Muslim holidays.

Today, he works as a Director of Finance at the NYC Health Department and most recently worked on Mayor Bill de Blasio’s election campaign.  Besides his professional work in public service, Bari is a parent advocate in the Upper Westside and has chaired the PTA Diversity Committee for the past 5 years at PS199 (the only school in Manhattan to win the coveted National Blue Ribbon School Award). He lives in Manhattan with his wife Rifat and two daughters, Maha and Suha.  After 35 years as one of the founders of the ICNYU, Bari remains as committed as ever to enhancing the understanding of Islam and empowering Muslims in the City of New York. 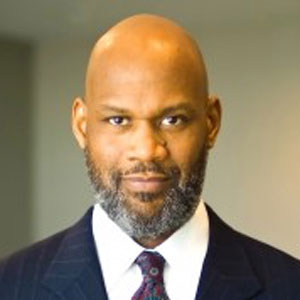 Malik Sabree is the Chairman/Founder of PIRS LLC and PIRS Holdings LLC.

Malik Sabree is the Chairman/Founder of PIRS LLC and PIRS Holdings LLC, the sole provider of credit ratings for the private lending industry that specializes in risk management and is the Founder of The Mores Group, LLC, a debt buying/private lending company established in 2009 He is also the Founder of The Viewtainment Corporation in 2006, which created and developed casual games for cellphone users long before the advent of the smartphone.

A post graduate of University of Iowa College of Law and Henry B. Trippie College of Business, he received a Juris Doctor and Master of Business Administration in 1999 and a Bachelor of General Studies from Virginia Commonwealth University in 1992. He is currently focusing on multifamily acquisition and asset management. 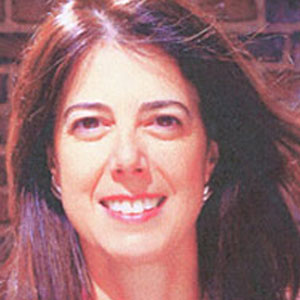 Laila Marie Al-Askari is the Director of Administration and Finance for The Brick Presbyterian Church where she is developing the organization’s systems to service inreach and outreach needs as well as interfaith work.

Ms. Al-Askari has a keen interest in serving the Muslim community, an activity that she has been involved in since her school days. In 2014 the Islamic Center of New York University (ICNYU) awarded Laila the Visionaries Award for her work in cofounding the Islamic Center during her undergraduate years at NYU. The ICNYU began with 7 members and today over 1,000 students and alumni are active in the ICNYU community. She feels that it is her duty to speak out for Islam, and clear misconceptions about Islam. As a young professional Laila formed the Young Muslim Professionals Club. It is Ms. Al-Askari’s goal to see Muslims become visible, and for people to see Muslims as valuable members of their society.

Laila’s interfaith work has led her in many directions. In 2017 Laila joined the board of the Muslim Community Network to continue her work on building bridges within our communities. She has served as Treasurer for the American Society for the Advancement of Muslims, and served as the Muslim representative to the Executive Committee for Auburn Seminary’s Face to Face Faith to Faith Program for conflict resolution, and currently serves in an advisory capacity to the Board of the Cordoba House and the Islamic Sunday School Program. During the past several years Laila has participated in interfaith panels on Islam at Marble Collegiate Church and other venues. Most recently Laila participated in the Muslim Leadership Training program jointly sponsored by the Cordoba House and the Hartford Seminary.

Ms. Al-Askari is a native New Yorker, a graduate of New York University with a BA and MA in Near Eastern Literature and Languages, and an MBA in Healthcare Administration from Baruch College/Mt. Sinai School of Medicine and is a Certified Health Care Executive (CHE). She was the Administrator for Cardiology at Beth Israel Medical Center, and later at Montefiore Medical Center, worked in the Otolaryngology and Ophthalmology Departments as the Director of Business and Clinical Affairs providing needed services for underserved areas. For this work she was one of the first administrators to become a Fellow of the New York Academy of Medicine. 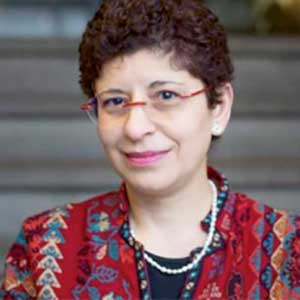 Azza Karam is a Professor of Religion and Development at the Vrije Universiteit in Amsterdam, in The Netherlands - of which she is a citizen.

She has served as a Senior Advisor on Culture, at the United Nations Population Fund (UNFPA) since 2007; and as Coordinator/Chair of the United Nations Inter-Agency Task Force on Religion and Development; where she coordinated engagement with members of a Global Interfaith Network for Population and Development with over 600 faith-based organizations from all regions of the world, representing all religions and interreligious affiliations. She is the Lead Facilitator for the United Nations’ Strategic Learning Exchanges on Religion, Development and Diplomacy, building on a legacy of serving as a trainer cum facilitator of inter-cultural leadership and management in the Arab region as well as Europe and Central Asia.

She served as the President of the Committee of Religious NGOs at the United Nations in 2003, and has supported the founding of numerous interreligious networks - and continues to advise - the Joint Learning Initiative on Faith and Local Communities (JLI – 2013), the Moral Imperative (2015) and the International Partnership for Religion and Sustainable Development (PaRD – 2016). She is also a member of the Trans-Atlantic Partnership for Religion and Diplomacy (TPNRD).

Professor Karam has served in different positions in the United Nations since 2004, as well as other intergovernmental and non-governmental organisations since the early 1990s, such as International IDEA, and Religions for Peace (RfP). Simultaneously, she lectured in various academic institutions in Europe, in North America (including the United States Military Academy/West Point), Africa and the Middle East.

Her Ph.D. in 1996, focused on Political Islam, and became her first book in Arabic (her mother tongue) and in English. She has since published widely, and in several languages, on international political dynamics, including democratization, human rights, peace and security, gender, religious engagement, and sustainable development. She was born in Egypt, and now lives in the United States.

MCN Co-Founders and Board Members Emeritus